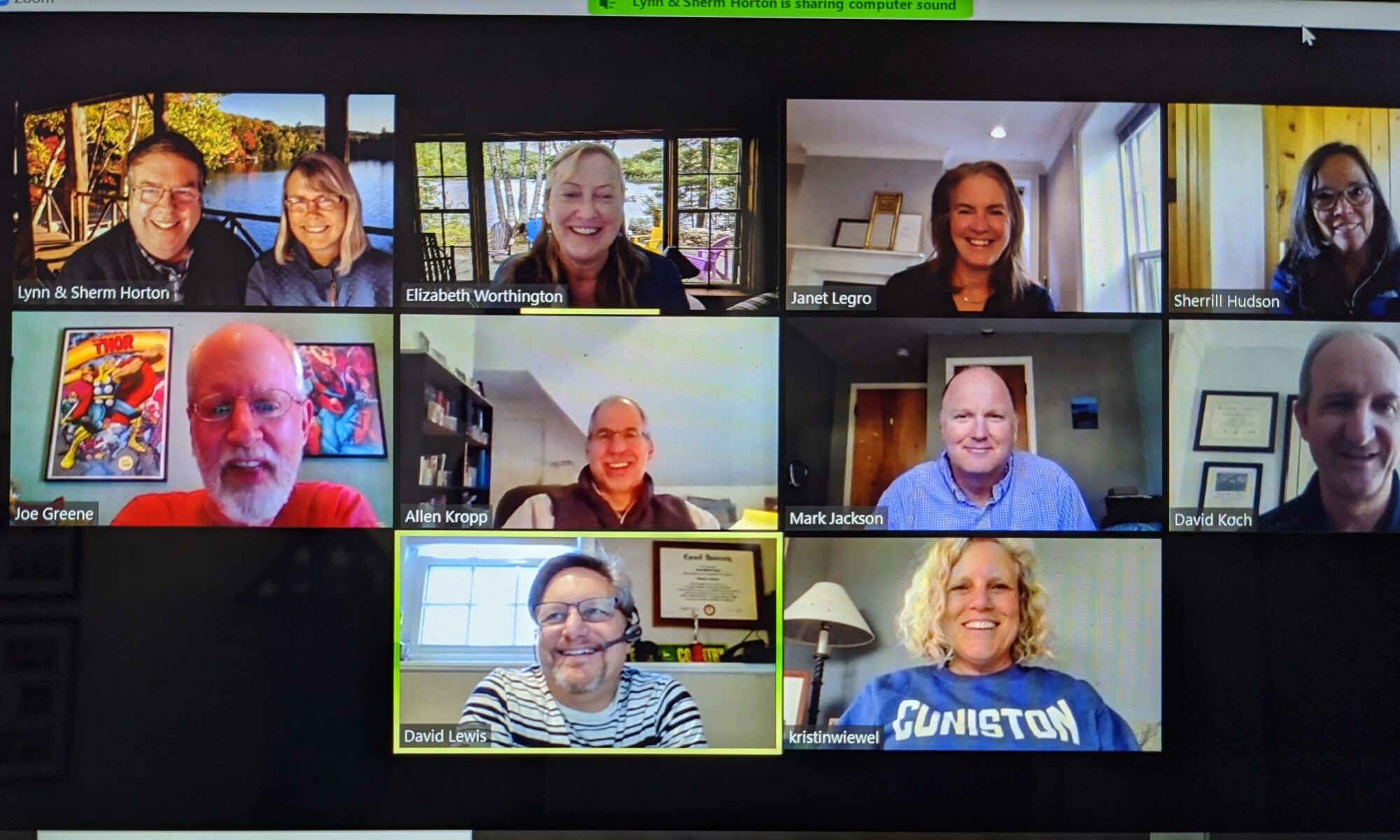 I received two videos from John Tilley this year that bookended my summer. The first one I received with many of you on May 14th in which he announced the heartbreaking, but necessary closure of camp for the 2020 season.  His tone was somber as the multi-layered realities of the decision loomed, yet he called on us to stand by each other and get through the difficulties ahead as a community. The second video I received came to me in mid-August. John’s voice was filled this time with giddy gratitude for what Coniston had evolved into over the summer: a place of respite for families, alumni, communities, and organizations.

Between those bookends, for me, were many connections to Coniston that would not have happened had it not been for the pandemic.  I’ll frame my reflections with Simon and Garfunkel’s lyrics to “Bookends”.

Time it was and what a time it was

In mid-May, I hosted a Zoom Sunday chapel service that was a re-creation of the “Reaching Out to Others” theme from 1982 that I had organized when I was chapel director. Forty people from the Sanders Era joined in, and many of them read the exact same passages that I had asked them to read back in 1982.

In the same time traveling theme, I hosted a Zoom vespers where I shared a story about trying to get some “quiet time” and “alone time” when I was on staff by taking a solo overnight. But in true Coniston fashion, I was interrupted by my friends who felt they needed to check in on me to see if I was okay. I tied that experience to this summer of COVID where I have more alone time than I want, and it is amazing that the same people who were checking in on me in the 1980’s are still in my life checking in on me now.

What a gift that began at Coniston. What a time it was.

It was a time of innocence, a time of confidences

A group of us “old folks” have been connecting via Zoom every couple of weeks and have an impromptu story telling contest of our Coniston memories to which we assign random points. It seems that each memory or story boils down to the same thing: how funny something was, how forgiving an environment Coniston was, and how thoughtful and supportive a leader Bob Sanders was. Bob has been able to join in on some Zoom events this summer and it is always wonderful to see him.

Long ago it must be, I have a photograph

Sharing photos on our Zoom screen means shouting out names of people we recognize while looking at pictures of Dale Ferguson’s retirement parade, days off in Claremont and Sunapee, and tacky day on the tennis courts. Today our phones and the cloud so easily capture and save our photos, but back in the “old days” it took great love and care to save printed photos (you had to wait at least a week to get them back in the mail!) Think of all the moves and life changes over that period of time, and yet we hung onto those treasured photos. It is so much fun to see them now.

Preserve your memories, they’re all that’s left you

This line of the Simon and Garfunkel song can seem kind of depressing. The reference in the song is to an older person who is seemingly left with only memories. But I could write an essay on the syntax of the lyric and the many interpretations available. I always chose to see the lyric as a promise. I’m a sentimental person and knew all along that I was preserving my memories not because they would be all I would have some day, but because they would catalogue my journey. Not as a remainder (all that’s left of you), but as a whole (it is all left for you). My preserved memories provide my life with richness and depth.

By keeping perspective of what we have even during the unusual summer…good friends, good memories, and good technology to connect us, I have focused on the blessings and know that better days are ahead.  Thank you to John Tilley and his caring team for providing opportunities to connect and for filling the days of the 2020 season with meaningful and important work. By becoming, ahem, that bridge over troubled waters.