By Girls and Boys Camp Directors — Fran and Will 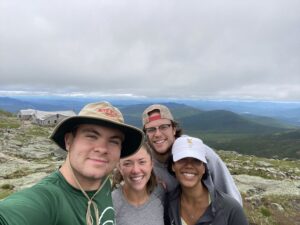 This quote played repeatedly in my head as I returned to Mount Washington and visited Lakes in the Clouds last week. It was my first time back since I hiked the 6,288 foot mountain as a counselor-in-training (CIT) in 2015. I was accompanied by 40 first-year-counselors (LITs, as they are known) who were robbed of their own CIT experience last year because of the pandemic, along with three other seasoned counselors. Michael, Maya and I were all East Coast CIT’s in 2015, and Will, a former West Coaster, was set to be one of the CIT Directors last summer.

The 40 supposed-to-be CITs who returned this year came back to Coniston ready for staff, but we all knew that they lacked the important buffer a CIT summer provided. The last time these seventeen-year-olds were at Coniston, they were campers (most of them our campers, in fact) and now they were leading cabins of their own. While they were fully capable of taking on that challenge, Will and I thought they deserved even an abbreviated CIT experience before the summer began. 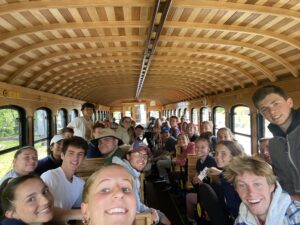 As we were talking about how unfair all of these losses were for these kids, we brainstormed ways that we could recreate some of our most magical traditions for the LITs during staff week; we settled on a surprise cog-up-hike-down Mt. Washington on the Friday before our first campers arrived. We told the LITs to be at the camp busses at 6:00 am sharp, and they were under the impression that the remainder of staff would be meeting them at Mt. Kearsarge in their own vehicles. After almost two hours of driving, many of the sleepy LITs began to catch on, wondering if we had gotten lost on our way to Kearsarge. We spent the day simulating a real-CIT experience, keeping them on their toes without letting them know what was around the corner. When we arrived at the Mt. Washington Cog railway station, we distributed the trail mix we had made, and handed them their tickets for the 45 minute train ride up the mountain. Since we had stored all of their cellphones on the bus, the LITs passed around my phone to take a few group selfies while they took in the view. “We should all hike down!” one of them suggested…be careful what you wish for! 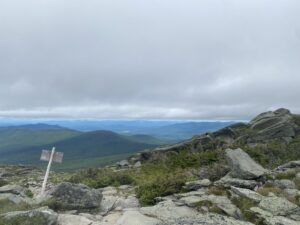 The climate at top of Mt. Washington was true to its reputation. It was frigid, windy, and foggy. Luckily, the weather did not stop each would-be 2020 group from getting together with their group and smiling for photos on our communal phone. We divided everyone into the four hiking groups and allowed each bunch to pick out matching Mt. Washington t-shirts. One group at a time, we began the hike down to Lakes in the Clouds—an ancient CIT tradition spot. When we re-grouped at Lakes, the sky had cleared up and the weather was warm. We handed each of the 40 counselors their individual envelopes stuffed full of letters from fellow staff members and let them find a quiet spot with a view to soak it all in. Michael, Will, Maya and I enjoyed a nice moment on a rock at Lakes, reflecting on our own CIT experience and noting the significance of this moment for these kids. As we looked around at the future of Girls and Boys staff reading letters from their former counselors and new co-workers, many of them crying—we knew all the work that we put into fitting this day into an already jam packed staff week was worth it.

A nice hiker walking through made note of the dispersed 17-year-olds reading their staff letters asking, “Who gave all these kids so much homework?” Although he did not directly comment on the fact that each of them was silently sobbing to themselves, he definitely seemed a bit concerned. One LIT came up to me afterwards, trying to act casual, and asked how his older brother (who was previously on staff) knew to write him a letter—clearly touched by his brother’s well-wishes. Many LITs commented on how meaningful their letters were, and the mood post-letter became much more sentimental. Our hike down the steep Ammonoosuc trail was filled with questions about being on staff and general getting-to-know each other conversations, as we shared our hopes and wishes for the upcoming summer. The line-leaders of each hiking group shifted, as each counselor took their turns making us all count off as well as practicing camp cheers and songs they would use on their own campers this summer. The four hour hike down seemed to fly by, and before we knew it, we were all together again at the base of the mountain. 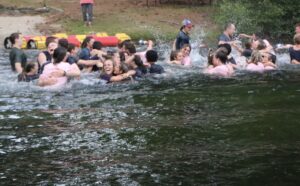 After some group hugs and pictures, we gave the LITs the opportunity to “ask us anything” about the realities of being on staff, our own CIT experiences, and their own personal questions. After inhaling a bit of pizza, (14 pies, to be exact) we were ready to make the trek back to camp. Ignoring any requests for them to check their cellphones, or their unconfirmed questions about whether or not they were going to run in the lake when they returned, we blasted music and sang all the way back to Main Camp Road. It was only when all three buses arrived on the A-field that we let everyone know that they were, in fact, running in the lake just like the CIT years before them. To the tune of Eye of the Tiger, we drove to the top of Main Lawn, where current and former staff members, many of whom were siblings of unsuspecting LITs, lined the path to the lake in their own CIT shirts. After a tight group huddle, we sprinted and dove into the lake. It seemed like everything happened in slow motion, just as I remembered it in 2015. As I took a step back to look around at the forty LITs hugging each other tightly as all of staff roared, a few tears came to my eyes, it was truly a magical moment.

After our tears dried and everyone changed out of their soaking clothes, there was a deep sense of gratitude—and closure. Will shared this sentiment as well, telling me, “Something I heard everyone saying tonight was how much closure they got today…I didn’t realize how it was the closure I needed too.”

COVID took a little bit from all of us this past year in so many obvious and some subliminal ways, but if this day showed us anything, the strength and perseverance of the community of Coniston is not going anywhere. No pandemic is too strong to break the bonds that we have spent generations creating here, and I am excited to move into the future with a strong and united Coniston staff. And so the tradition continues…as we move into the summer, I hope that we all remind ourselves of the strong sense of community that day brought to us all. When the summer gets tough for us at camp and in the real world, I hope everyone reading this takes a little magic from the unwavering spirit of camp with them to their own trials and tribulations.