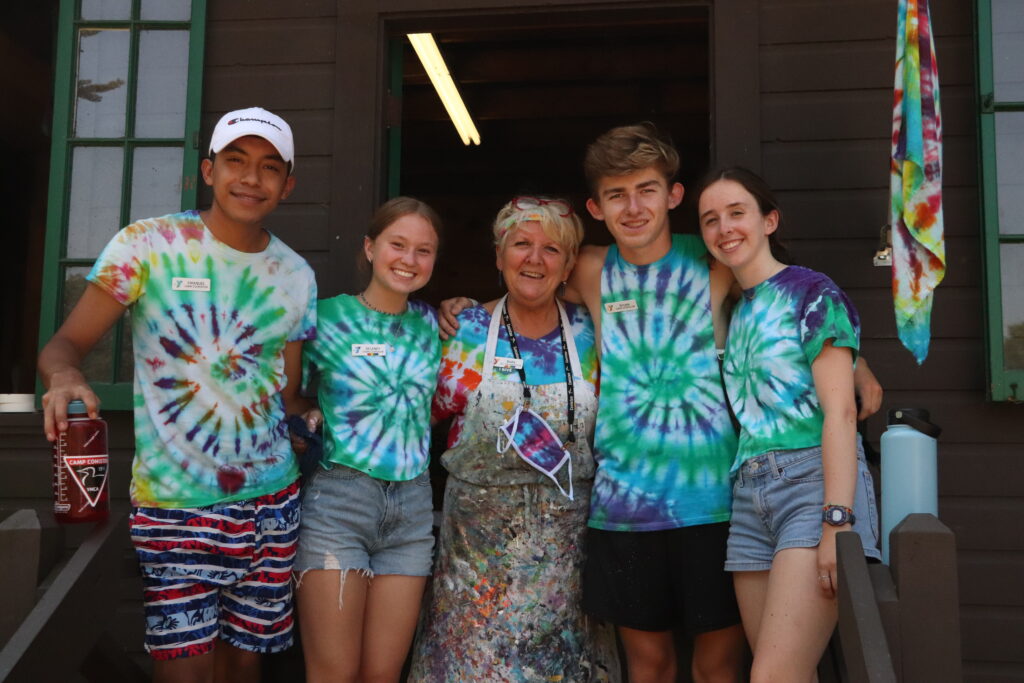 We spoke to some staff members about their favorite moments from Summer 2021! Read about summer staff’s Dylan, Cullen and Jamie’s favorite summer memories.

We got a really bad rainstorm on the day of the Ice Cream Social. So for the whole day the topic on whether the ICS was going to happen or not was very nerve racking and it kept everyone on the edge of their seats, not just the campers but also the counselors because we love it just as much as they do. Unfortunately the rain was really bad and they had to postpone the ICS to a few days later (lucky for us we had the first ICS social in the middle of the day which was pretty awesome). But something really cool that happened is that within about 10 minutes, the program office came up with an evening program and it was to turn your cabin into a crib. I do not think I have ever seen my campers get so bummed out and then end up having one of the best nights at camp. We had a bean bag chair, LED lights, they had their hats hanging up all around the cabin, kendamas doing cool tricks, and we also had music going as well. Seeing them so excited about what they created made me feel so happy and even for me, it was definitely one of the best nights throughout the entire summer.

Another fun moment at camp was during cabin night. It was either Session 3 or 4 and we did kickball, but put a little twist on it. Every time the campers scored a run we would spray them with the hose and by the end of the night we all were soaking wet. Our main goal was to make sure that no one left the A-field dry, not even the counselors. Also on the A-field, another cabin was doing a slip and slide as well as another cabin doing tag with shaving cream. And near the end of cabin night, all of the A-field went crazy. There were campers chasing after me with shaving cream as well as campers going on the slip and slide and people sliding everywhere because at this point, it was not really a field anymore. But I think this really shows what camp is about. We do not need a specific plan or schedule, all that matters is that the campers have fun and create fun memories. Sure we were supposed to play kickball, but the fact that we all ended up having fun together made the night really special. Anyone can play kickball, but can they do it while getting chased by campers with shaving cream, not unless you are at Coniston. This has been one of my favorite memories at camp so far, and this will be my tenth year and I have a lot of memories already!! 🙂 This is what makes Coniston so special and unique, the only plan for the entire summer is to have fun, and the path to get there is never the concern, the only concern is that everyone leaves camp with a smile on their face!

One of my favorite memories was jazzercise day on gfro. Basically we would all dress in neon and have a jazzercise dance to start us off and then at the end of the class we would have a huge freeze dance game but when the music stopped everyone would jump into the water and swim to the line as fast as they could. It was a huge hit that the campers really enjoyed.

Senior division night was also a lot of fun for the campers. Viking ball as always was a huge hit especially since it was the first time for all the campers due to the missed summer. We also had a big party on the a-field for another division night which we called kickback with a bunch of different activities that campers could choose from depending on what they wanted to do. We had two huge bins full of water balloons that led to a giant water balloon fight which was so much fun and it got everyone involved which was a great sight to see!

One special experience was during free time a few days before the drama show. I had a boy in my cabin who was the lead role in the play. When I walked in, I saw some of the younger kids were having trouble. I watched the lead boy take them aside and explain to them what they were supposed to do and how to fix their lines and such. It was such a cool moment being able to see one of my campers step into almost a counselor role for the younger kids. There were a lot of great experiences this summer but these definitely stood out for me.

It is definitely hard to pick just one favorite, but up at the top of my list of evening programs would definitely have to be Tik Tok night. The camp was split into the hype house vs the sway house, and campers went around to stations to win likes and money for their house. Campers were super into the Tik Tok themed stations and it was awesome to see them so excited.

Of course we also did the Olympic Games style color wars during all of session 3, and it was so fun to see campers try to win points for their “country” all session long. They could win points through things like winning an evening program, winning cabin clean up, or finding rocks hidden around camp etc. Campers would literally spend all of free time searching for rocks, it was hilarious. On Sunday we held the Olympic Games and they could earn mass amount of points for their teams, complete with a torch lighting opening ceremony.

We also ran a camp-wide game of Among Us for a Sunday program that went really well! One cabin each round got to be the imposter and try not to get caught by the rest of camp while doing tasks around camp.